I don’t think I’ve made a secret of how much I love the Peter Capaldi era of Doctor Who. After the bloated and often incoherent second half of Matt Smith’s tenure as the Eleventh Doctor, Capaldi’s back to basics approach as the Twelfth Doctor was a breath of fresh air. He knew what he wanted out of his Doctor, and Steven Moffat wrote some of his greatest episodes. This was a creative partnership made for the ages. You can imagine how sad I was when it was time for Capaldi to regenerate in Twice Upon A Time.

Just Some Bloke, Wandering Around

Of course Capaldi’s tenure wasn’t perfect. His first season, while containing amazing episodes such as Breathe, wasn’t my favorite due to his cold and distant attitude. I figured it was obviously the beginning of his character arc, but during the early days when all you had was Series 8, it was off-putting.

But you know, Eleven died because he cared too much, and Twelve over-corrected by being cold and calculating. By Death in Heaven, he finally found the compassion that defined his tenure, and I’ve been in love with his Doctor ever since.

Series 9 culminated in the amazing trilogy of Face the Raven/Heaven Sent/Hell Bent where he not only fails to save Clara, but he also loses all of the memories he has of her. By the end of the series, he’s broken in a way we’ve never seen before, and the worst part of it all is that he can’t even comprehend what exactly he lost.

He found a way to start over again when he met Bill Potts, and after a season of their fantastic partnership, we lose Bill thanks to the Master and Missy’s machinations. The Doctor loses yet another companion.

What struck me the most about Peter Capaldi’s era is that from the start it has always been centered around death, starting from series 8’s exploration of the afterlife and its culmination in Death in Heaven. Both Clara and the Doctor went to extremes to cheat death and save a loved one, only to learn that they are powerless against it in the end. Seeing the same thing happen to Bill was too much for poor Twelve. His life is filled with too many tragedies. Tired of his losses, he tries to stop his impending regeneration so he can finally die. And this is where Twice Upon A Time comes in.

The Twelfth Doctor encounters his first incarnation, played wonderfully by David Bradley. They are both on the verge of their respective regenerations, trying to hold it off for different reasons. Twelve, as mentioned earlier, just wants it to end. The First Doctor, however, is afraid. It’s his first time and he’s scared of the person he’ll become.

Complicating things further, time freezes, and a World War I British Captain, played wondefully by Mark Gatiss, arrives on the scene. Both Doctors decide that this is a mystery too alluring to resist, and they set aside their melodrama to try to get to the bottom of it. Turns out Gatiss’ captain was thrown out of his proper time moments before his death. As a result, a group called Testimony is hunting him down so he can be returned to his proper place in the timeline. Bill Potts returns, albeit only as a computer simulation made out of her memories, to push the Doctor to surrender the captain to Testimony.

What I absolutely loved about Twice Upon a Time is that it wasn’t an episode filled with whimsy. It was melancholic and introspective. It was absolutely the opposite I was expecting out of a Moffat Christmas special. It didn’t feel emotionally manipulative just to wring tears out of its audience – every heart-wrenching moment in it was earned from three seasons of fantastic and top-notch storytelling.

Of course, being Doctor Who, there were a bit of silly moments here and there – my favorite would be all the gags around the sonic glasses. I thought the sexism the First Doctor exhibited was overdone, but I totally understood why it was necessary. Also, seeing Capaldi’s Doctor acting embarrassed over the First Doctor’s outdated values was hilarious. 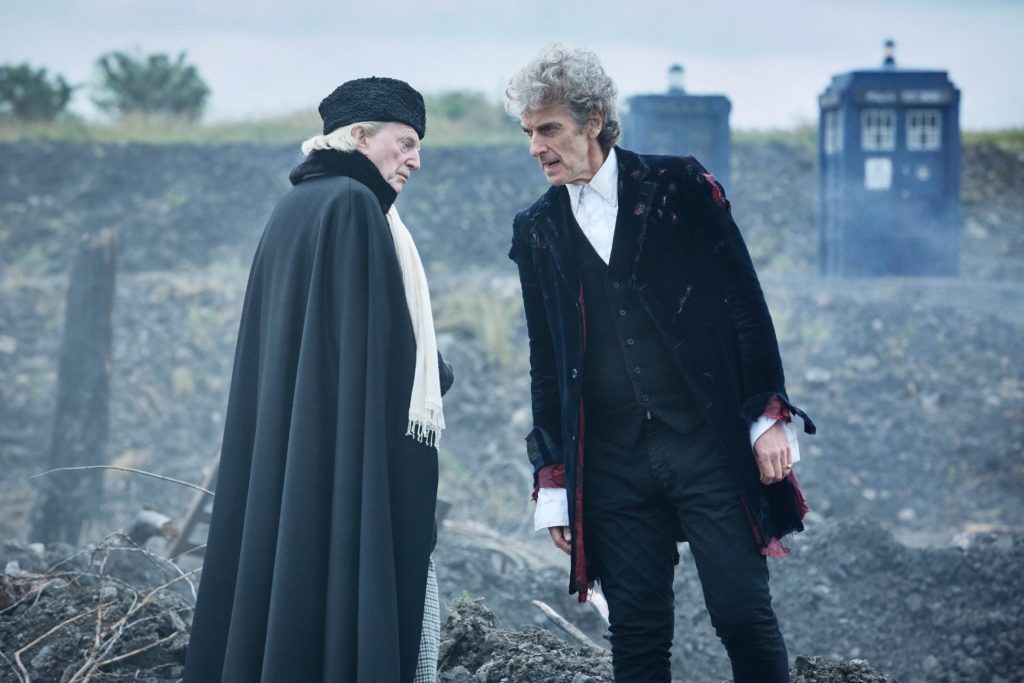 Being used to bombast in Moffat’s Christmas specials, I was amazed at how quiet the entire episode was. I really loved how the entire resolution to the episode was centered around the Christmas Truce. It was a nice, low-key moment of humanity that was beautiful. As much as I dislike Gatiss the writer, I always loved Gatiss the actor. I never expected that this goofy guy can exhibit so much sadness and humanity. And the reveal that Gatiss’ captain was actually Brigadier Alistair Gordon Lethbridge-Stewart’s grandfather made the entire thing even more touching.

Doctor, I Let You Go

Finally, Peter Capaldi’s Doctor accepts his fate. he goes back to the TARDIS, agrees to one more regeneration, and goes into one of the best monologues in his era. He distills his Doctor’s run into three minutes, in disguise as advice to whoever is taking his place.

It’s not a huge, bombastic moment. It’s a quiet celebration of one of the greatest eras of Doctor Who. I wish we could get one more year of Capaldi, but this is Doctor Who and it always changes. And seeing Jodi Whittaker as the first female Doctor, exclaiming that the Doctor’s new form is brilliant, is making me excited for the future.