Three years after DC introduced wide, sweeping changes to their mythos by way of the New 52, I’ve remained pretty indifferent to what DC has to offer. Mainly because I feel that the previous DCU was a rich universe full of legacy and history, and at the same time insanely accessible.

I became a DC fan not because their stories were dumbed down for people who knew only the barest facts about Batman and Superman. I became a DC fan because the universe these characters inhabited was so large, and had a vibrant past that you could spend weeks reading up on the rich history of, say, the Flash and see where Wally West has come with the mantle’s legacy.

Another reason why I didn’t welcome the New 52 with open arms was a bit more personal – these are the version of the characters I grew up with. No matter what you do, no matter what you change, John Byrne’s Superman or Frank Miller’s 80’s Batman will still be my favorite interpretations of these characters. Batman: Year One, to me, is the closest a Batman story can get to perfection. It’s a smart, concise take on Batman’s origins set in the backdrop of the 80’s crime wave. It smartly jettisons the bloat Batman has accumulated over the decades and gave us an origin that made sense in a more mature and realistic world. And it worked. The Nolan Dark Knight Trilogy owed a lot to Frank Miller’s Batman. The Batman stories coming from Year One tried to emulate the grittiness with varying results.

Which brings us to Scott Snyder’s Zero Year. I admit, as much as I am a fan of Snyder’s Batman work, I didn’t want him to touch the origin story. Sometimes a story like Year One comes along that is so perfect that there is nothing anybody can do to top it. Thank goodness Snyder felt the same way, too, and decided to make an origin story as far away from Year One as much as he can.

Sure, Year One and Zero Year contained a lot of the same elements – Bruce Wayne coming back to Gotham after years of travelling. Driven by a strong desire for revenge after his parents’ deaths, Bruce Wayne attempts to fight the organized crime that is eating away at Gotham, only to fail over and over again. About to give up, he finds inspiration when he sees a bat land in his father’s study. And the legend of the Batman is born.

But that is where the similarities end. Year One was a realistic, gritty story inspired by the New York crime wave of the 80’s, trying to find a realistic rationale for all the comic book elements that Batman has accumulated throughout the decades. Zero Year, on the other hand, embraces all the absurdity of Batman and along with it, introduces an origin that celebrates the sci-fi, tech, and comic book side of the character. It doesn’t always make sense. But it doesn’t have to.

Take, for example, the circumstances that made Bruce Wayne say the iconic line “Yes, father. I shall become a bat.”

In Year One, Bruce Wayne, posing as a war veteran, tries to rescue Holly Robinson from a prostitution ring. His very disguise makes her pimp suspicious, and he gets stabbed. Over and over. Dying, he retreats to Wayne Manor, debating whether he should die in his father’s study or if he should ring a bell to summon Alfred and patch him up. Then a gigantic bat crashes through the window, lands on his father’s bust, inspiring Bruce.

In Zero Year, it’s a bit more… absurd. Bruce Wayne, as a kid, uses a floating orb that is also a camera/projector that captures and project a 3D image on the underground cave located under Wayne Manor. He falls in, and has his dad rescue him. Years later, his apartment gets blown up by the Red Hood gang, and he gets savagely beaten up and shot. Bleeding to death, he retreats to Wayne Manor, where he gets patched up by Alfred. Meditating on his constant failures in his war against crime, he accidentally activates the camera orb, projecting the inside of the cave in his father’s study. A bat crashes  through the window, lands on his father’s bust, and Batman.

I honestly think the projector orb was a bit too much and almost pushed an important moment into absurd territory, but Snyder’s Batman is more dependent on tech than previous versions. If we didn’t get two previous arcs where Snyder filled Batman’s world with barely-believable gadgetry, this scene wouldn’t have worked.

That’s what Zero Year is – it takes the concise origin of Batman and fills it up with so much stuffing that it often comes close to becoming ridiculous, but thanks to Snyder’s total understanding of the characters, it just works. It’s full of moments where Alfred tries to steer Bruce Wayne into doing the right thing, while young and angry Bruce stumbles into one mistake after another until Alfred sets him right. He finally dons the cowl and… he still makes more mistakes. He ends up losing control of Gotham City to the Riddler, who proceeds to cut off all communications and uses Poison Ivy’s research to cover the city with plans and make it look like a post-apocalyptic nightmare in less than a month.

And this is where things start to fly off the rails, Batman, James Gordon, and Lucius Fox start an alliance and work underground to take Riddler down. And you know the best part?

Batman gets stuck in an underground lair with lions. And naturally, he wrestles with the lions. And wins. 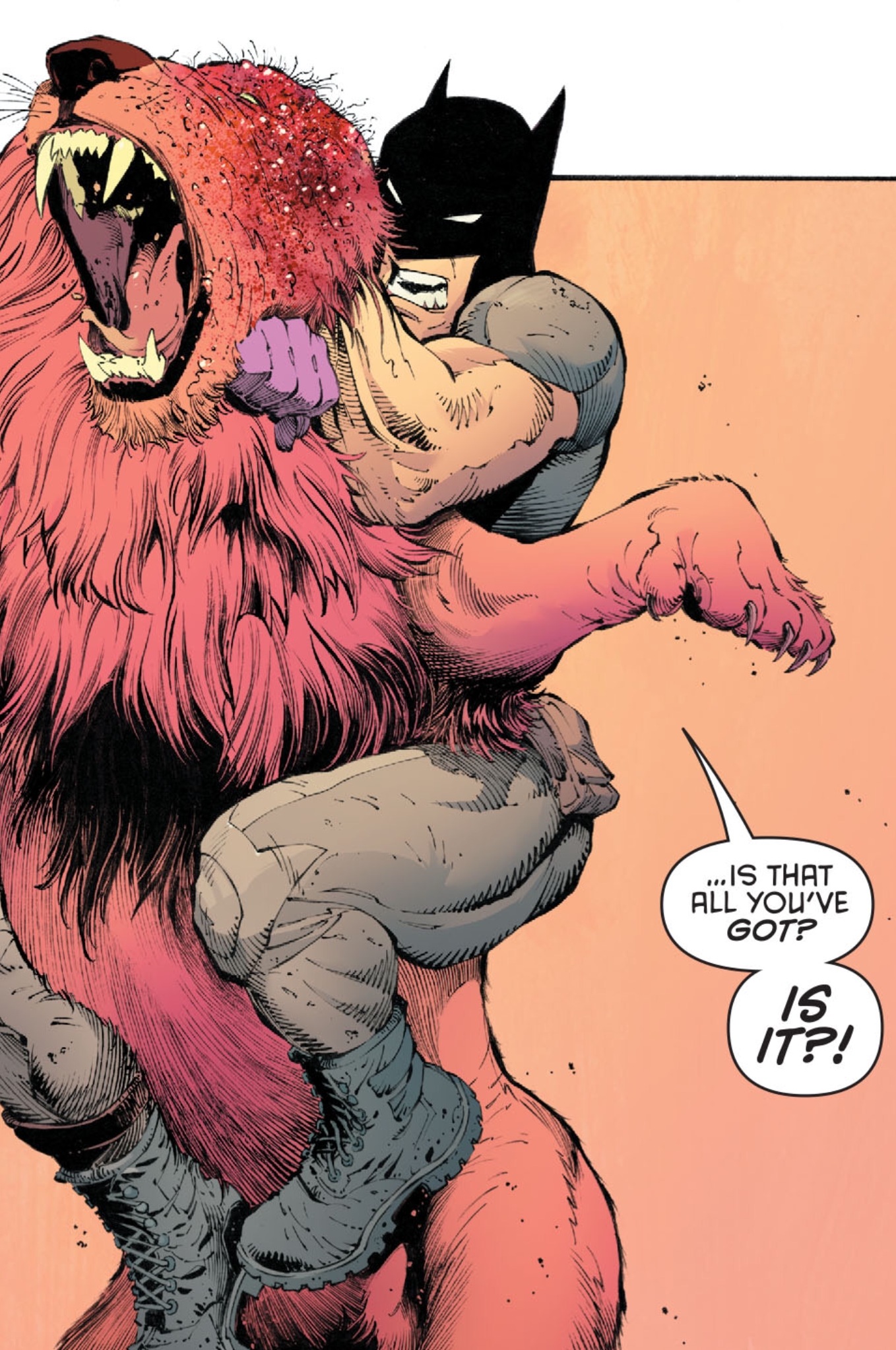 I may love Zero Year, but I do have a lot of problems with it. Mainly, it feels too big and to epic to be an origin story for Batman. But I love how it takes the opposite of Frank Miller’s muted, grim, and realistic Batman origin and embraces all the color, loudness, absurdity and ridiculousness comic books have to offer. Scott Snyder may have written some of the darkest Batman stories in recent memory, but he never forgets the theatricality and ridiculousness that is at the core of the character who spends his nights dressed as a bat – and he bakes it right into the origin.

What do you think of Batman: Zero Year? Tell me about it in the comments.