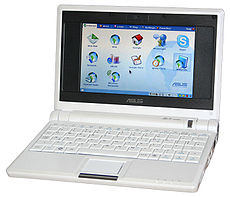 As everybody and their mother knows, I have been lusting for the ASUS eeePC since time immemorial. When I say “lusting”, I mean “keep me away from the nearest eeePC because I swear, I will dry hump that bitch if I ever get my hands on one.” Well, I actually had the same feeling when I saw an iPod nano way back in 2005. I knew it wouldn’t be a wise purchase because my shuffle was still working faithfully. Well, a year later I was dry humping a baby blue iPod nano 2nd gen (yes, I know, baby blue. How manly. Shut up).

It was by then I realized that I have a little problem. No, I’m not talking about my penis size, you perv (that’s a huge problem. Har, har har). I’m talking about my seemingly innate ability to not save up. Just put a huge amount of cash on my hands, and I’d walk away with the most useless of things. By the time I need to spend for things I really need, I’d be broke. Yay!

Here’s a rundown of the things I’ve bought so far:

So back to my story. I was standing in front of a computer shop staring at a sweet little eeePC. I felt that familiar urge to buy the shit out of it. Thus began my struggle with my prudent self. I could remember my prudent self actually winning at one point. But my evil side started to play dirty.

At the end of the week-long battle, I gave in to temptation and bought me a spanking brand new pearl-white ASUS eeePC 701. After spending two hours dry humping it on the bus home, I decided to open it up and give it a try. And it’s frigging awesome. The default Xandros Linux installation blew me away, and I have no plans of installing Windows XP on it so far. The only thing I hate about it is the keyboard.

Now you might be asking why the underpowered ASUS eeePC and not some other souped-up laptop? (this Ade gai, what an underclocked lollerskatez) Because aside from the fact that I’m a cheapskate, it’s cool. And sexy. Geekily sexy. So you can call me a sexy geek:

I GOTS GEEK CRED, YO!

Also, don’t worry about my frugal and extravagant personalities. Ever since they saw how awesome the eeePC is, they’ve stopped their stupid feud. They’re now been good friends. BFFs even!

If you have an ASUS eee, fellow geek, tell me about it! Also, do you have an impulse buying story you’d like to share?