When you’ve had a blog for a while, you’ve been sharing your thoughts with the rest of the world and of course it’s gonna be expected that when you get a bunch of regular readers you’d all be thinking on the same wavelength sooner or later. I’m sure that we have already that kind of relationship, dear loyal reader.

So I’m not gonna waste any words on this entry. I’m just gonna show you a picture of a pack of hotdogs I found the other day. The company took a novel approach to the sausage packaging: they actually named the hotdogs after a celebrity endorser and actually put his picture on the packaging: 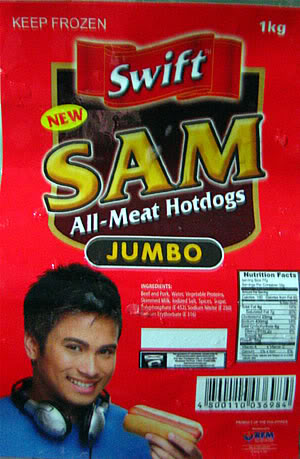 Check out that Sam Milby Hotdog

I’ll get back to you later.