I honestly don’t want to write about the Eraserheads because, well, everyone else is blogging about it now and I don’t know what else to add to the babble. I don’t want to write a blow-by-blow account of the concert, or even a recollection of my favorite moments. I shan’t bore you with that. But still, even though it’s been a day after the concert, I’m still on a high and I’m typing away this entry even if I can barely keep my eyes open.

I’m not the biggest Eraserheads fan around. I know of a hundred people who can claim that they are the biggest fan. I only have Cutterpillow and Fruitcake (plus the book) in my collection. Like so many people, I thought they jumped the shark when Sticker Happy came out. I’ve never seen them perform live.

But if you’re a kid growing up in the 90’s, they’re inescapable. I was able to get a copy of Circus recently and I was amazed to discover that I know every track by heart, thanks to my class adviser who played the album in an endless loop every single day of my 5th grade life.

Every kid who started to play the guitar back in the 90’s trained themselves on one of two songs: Line to Heaven by the Introvoys (I shudder when I recall the glee I felt when I realized how easy it was to play D-A-G-A; let’s not delve further) and Ang Huling El Bimbo (which nobody regrets playing).

With a Smile was everybody’s anthem for those ugly days when nothing went right, and Kailan was the best song to pick when you want to impress a girl. Magasin was a great song to play when you’re bored. Para sa Masa (probably their worst song) was playing everywhere . After getting drunk, the staggering-to-home song of choice is Alkohol. No friendship would be complete without meaningful stares, full of bromance, Minsan playing in the background (we were very cheesy kids. Shut up). Ligaya was one of those feel-good songs you just can’t get out of your head. The uncensored Pare Ko was the best way to shock the shit out of uptight elders. I also found myself relating to the same song years later, after getting drunk over a girl. Good times. The Eraserheads, it seems, have a song for everything.

Which brings everything back into perpective as I stood in that crowd in MoA that night. I was singing along to every single song they played. When Ely ordered the crowd to jump, I obliged cheerfully. I was speechless when I caught The Beatles refereneces in Spolarium. I found myself filled with nostalgia for simpler days when everything had a rosy tint and the music was sweet.

And when Ely stepped over to the Stickerhappy piano, we knew it was going to be something different. And then he set it on fire. We were all shocked. Partly because seeing one of our childhood heroes playing a burning piano is one of the awesomest things that everyone should see in their life, but also the act of burning and destroying the iconic piano was full of meaning. 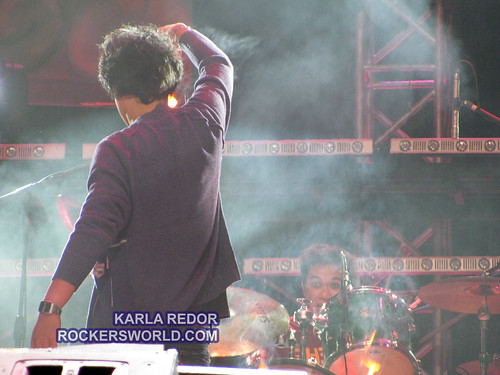 We can’t assume that Ely saw the symbolism that time. For all we know he was just trying to outdo Jimi Hendrix (Hendrix burns and trashes guitars, but Ely Fuckin’ Buendia burns and trashes PIANOS! Beat that, Jimi boy!), but the piano was to the Eheads as the violin bass is to Paul McCartney. Trashing the piano was saying “Ok guys, this is it. We gave in and gave you the concert you asked for. The Eraserheads are officially over. Goodbye.”

So it really is over. Frankly, I can’t think of a better way to go. Seeing these guys perform together for the last time, playing the music that everyone loves, has given me goosebumps of the nostalgic kind. I left the concert grounds sad with the fact that this is the end, but also thankful that their music made the ’90’s an oddly crazy but awesome time to grow up in.