UPDATE: He’s at it again. And this time, he’s decided to plagiarize not just me, but the entire Man Blog. You can help me take him down by flagging that bitch.

If you have noticed, I fail at updating this blog regularly mainly because coming up with stuff like this is hard. There’s only so much insult and humiliation I can put myself through without reducing myself to a sobbing ball of shivers. You’d usually catch me doing the fetal position in one corner and contemplating how much my life sucks and how I can further reduce my dignity and readers’ respect of me by writing how much misfortune I put myself in. Then I write about that particluar unfortunate event. It usually takes me a couple of days because iTunes is set to play “Sinabawang Gulay” on a loop and I couldn’t help but sing and dance along to it.

Hard work, I tell you.

Fig 1: How Hard Blogging Is

So imagine if you log on to the net and one day and you find out that somebody has copied your work, word by word, image by image, and passes it off as his own.

I’m not going to name names and I certainly am not going to post a detail-by-detail account of the event because it’s over. Also, if you have been following my Twitter and Multiply and are a fervent monkey of The Man Blog Forum, you’d know what went on. Anyway, the plagiarizer, though there was not an ounce of apology in him, has grudgingly agreed to take down the offending blog. Too bad Blogger beat him to it. Yay!

EDIT: I have to thank some people for helping me at the time: The Man Blog monkeys for snarkinating the blog to hell, Doc Tess for helping me investigate the mystery of this guy’s identity, and Adam Mordo for informing Aileen Apolo about this (no wonder Blogger took it down quickly).

Also, my blog is protected by a Creative Commons license copyright thinggummy. Yeah. That means you can’t copy my work yay!

Fig 2: Legal ramification of stealing my work: the wrath of Chuck Norris

Anyway, this event got me thinking: is thinking for yourself too hard? How hard can it be for anybody to string together a couple of (incomprehensible) sentences, talk about your life and show it off to your friends? I know, I know, I’ve been rallying against mediocrity on this blog of mine for the longest time. But you don’t have to write awesomely, just don’t fucking steal somebody’s work. I mean, this guy’s blog was entirely made up of my articles, which he had been patiently copying-and-pasting for a good three to four months. (Okay, to give him credit, he had some original articles in there. One. Pffft.) Imagine if the time and effort he took to pretend that he wrote those articles had been focused instead to write original stuff.

I seriously wonder why people do this. Come on people, you can do better than that. I mean, what goes on into the minds of those people? Do they go “Holy crap! This [insert name of blogger]’s works are awesome! hey I want to write just like him! Wait, I’ve got a better idea: why don’t I just copy the blog and pass it off as my own? Brilliant!”

Fig 3: I have no funny caption here. Move along.

I was relating this incident to a friend yesterday when she told me “Ade, take it as a sign that your fame is growing. Also, he probably wants to be you.” Um, okay. I wouldn’t want to be me. Also, me, famous? O RLY? If that fame would translate to money and willing women falling in heaps in front of me asking me to impregnate them with my awesome Ade Juice, I’d believe it. But now, all I can show for my supposed fame are screencaps of a deleted blog of somebody who copy-and-pasted my work.

Also, if you’re wondering why I’m blowing steam off this event and you can’t get my point, just think about this: my blog is the product of a good part of almost two years’ work. It’s unacceptable to see somebody take credit off something I worked hard for.

I may be a nice guy, but I am possessive when it comes to my work. Especially on the internets. Because the internet is serious business. 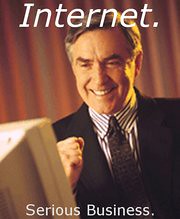 So, has anybody stolen your work? What did you feel and do about it? Tell me more about it by leaving a comment!