An Exclusive Interview with Manny Pacquiao

In the light of teh boxing superstar Manny Pacquiao’s awesome victory over Erik Morales, The Noisy Noisy Man (yours truly) was able to catch Manny Pacquiao in a strip club secret location somewhere in Las Vegas and was able to score an exclusive, no-holds-barred interview with him. 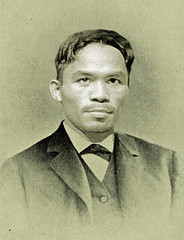 Me: Before we go on, let me just tell you how proud I am of your victory.
Pacquiao: Yeah, yeah. Hey, did you see how that stripper grab that beer bottle with her-
Me: Um, look here.
Pacquiao: Man! I would like to get a piece of that-
Me: Look here.
Pacquiao: Oh, oh yeah. Want some ChickenMcDo?
Me: Uh, no. So, tell me, how do you feel over this victory over Morales?
Pacquiao: Of course it’s awesome. No one can stand up to the brunt of my fists. You see, I love fisting. The ladies love the power of my magical left hook!
Me: …
Pacquiao: Now if you stand up and turn your back to me, I’ll demonstrate the power of my mighty fist…
Me: Dude, that’s gross.
Pacquiao: But.. but.. but-
Me: So, when Morales was knocked down and refused to get up again, how did you feel?
Pacquiao: Of course it’s satisfying. Just like eating an entire bucket of Magnolia Ice Cream. You see, I have No Fear. I am teh winnar! After he won by a butt during the first match, it’s time to PWN him really good.
Me: But… but… didn’t you just pwn him during your second match?
Pacquiao: So I did. But it wasn’t good enough. Did you just see the look on his face when he refused to stand up! He needed Alaxan!
Me: Um…
Pacquiao: Also, I should’ve invited him over to my place after the match. We could’ve drank lots of San Miguel Beer afterwards. We’re gonna get drunk and sing on my Extreme Magic Sing!
Me: Um…
Pacquiao: Speaking of that, I’m just gonna do that. I’m gonna call him on my-
Me: Talk n text cellphone?
Pacquiao: You’re good. Hey Erik, wanna drop over at my place, I got beer, chicks and-
Me: Um, there are so many things I want to ask you, so many things you can tell me…
Pacquiao: Listen, do you have a copy of my album? I could give you an autograph.
Me: Huh?
Pacquiao: Ok, my boxing trunks will do then.
Me: But-
Pacquiao: Here we go, an autographed pair of my unwashed trunks from my match! It’s even got the Motolite logo on it.

Me: Um-
Pacquiao: Also, let me just state for the record that I’m not running for any political office. That’ll put those rumors to rest.
Me: That’s nice to hear. I’d rather you be remembered as a boxing star-
Pacquiao: I changed my mind, I’m running. Manila vice mayor, baby!
Me: Uh-
Pacquiao: Listen, I have to go… just get a copy of my bioflick The Manny Pacquiao Story from the lobby, and we’ll be good friends.

DISCLAIMER: This is satire. Please don’t sue me. 🙁